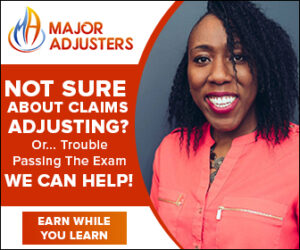 How Does Family Money and Claims Adjusters Mix?

Enjoyment for years to come is that breed of comical insurance commercials that the carrier uses to gain consumer loyalty. One of life’s minor mysteries is how the public insurance adjuster position never appears on-screen. Yet adjusters manage to arrive at the scene – day or night – almost at the same time as the firemen.

“It’s incredible,” said William Durkin, president of the Holman-Durkin agency. “I’ve seen cases where the hoses were barely hooked up before the public adjusters were swarming all over the place” trying to consult the homeowner.

The consultation a public adjuster furnishes is the preparation of property damage insurance claims for the insured – not just fires, but also small losses like water discharges and storm damage. The adjusters operate from a percent of what case is recovered from the insurance company. Fees vary with the amount of damage – the bigger the claim, the smaller the percentage – and within limits. The big question from a discerning homeowner’s point of view is whether the public adjuster is worth his fee; what can he do that a savvy homeowner possibly can’t do for himself? Even their insurance agent wouldn’t be of much help. Most agents are not aware of this protection for their clients.

According to the New York Times, “the question is considered controversial by many in the industry. The major of insurance companies, for obvious reasons, would just as soon not have to deal with public adjusters at all” (Phalon). According to Charles Pestcoe, a senior vice president of Sarasohn & Company, one of the biggest public adjusting concerns in the country, says, “there are plenty of incompetents in the field”. It used to be, that “their only claim to competence is that they’ve worked for an insurance company, or that they are contractors”.

Unlike many insurance professionals, Mr. Durkin is “neutral” on the topic. “When my clients ask me if they should hire a public adjuster”, he said, “I tell them that since they’re paying the fee, they should make up their minds” (Phalon). Fortunately, competent public adjusters invariably get larger returns on a claim than “the average homeowner who has to fend for himself” stated Mr. Durkin to The New York Times reporter Richard Phalon. The stresses of a home damage claim are comparable to suing someone. The process of just winning, let alone collecting the settlement, is grueling and strenuous. In the end, claimants give up; Others even vow to never file a claim again.

Being An Insurance Adjuster In GA

Georgians are now operating under the stress of just having to pay for their repairs and pair for their insurance premium. It’s like they are paying twice. The complexities – the differences in costs and what will truly bring the home back to pre-loss condition. Unlike the insurance companies, who focus on ‘how much is the repair going to cost, the public adjuster focuses on bringing the home back to pre-loss condition.

In the case of some insurance adjusters sending out an advance to homeowners for personal property is typically overlooked and they don’t instruct homeowners on proper documentation of a claim. Most people don’t think to even think to stop and take pictures before the disposal of damaged property. What homeowners don’t know, is the cost to pay full replacement value or cash value – what it cost to replace minus depreciation. In the case of a roof, for example, Allstate will only pay the cash value of a roof depreciated at 3% per year. A 15-year-old roof would only receive 65% of the full cost. Essentially, Allstate pays $6,500 for a $10,000 roof. If a homeowner has a $1000 deductible, they would not receive more than $5,500 for that same $10,000 roof.

FAMILY MONEY AND CLAIMS ADJUSTER: The homeowner does not know that a settlement amount would have been higher using a public adjuster to review their policy before a loss. After a loss, it’s left for the homeowner to have to find a ‘bargain deal’ by sending the insurance company multiple estimates. This needless work is how the insurance companies can also delay payment of a covered loss. The executive Mr. Pestcoe states “the insurance companies have their own internal unit cost guidelines based on the price of so many square feet of shingles so many square feet of paint.” The guidelines, typically set by an estimating software called Xactimate, and hidden policy coverages figure heavily in the size of the settlement. A professional public adjuster is aware of Xactimate, hidden policy coverages, and local laws which makes the public adjuster worthy of their services.

How do Family Money and Claims Adjusting Work?

According to Metro Public Adjustment, the nation’s largest public adjusting firm, and the founding members of the American Association of Public Insurance Adjusters, cite past wins including Charlene Weiters, a homeowner who initially received $250 for her water loss claim that caused extensive damage to her 3 bedrooms, bathroom, kitchen, and living room. She hired a public adjuster, Ebahi Ejerekhile, and the insurance company increased the settlement to $20,000.

Over 30 states require a public adjuster license which includes an examination to reduce fraud, misrepresentation, and ambulance-chasing in this highly regulated industry. In Georgia, a pre-requisite course is also required before the examination. In Florida, public adjusters are required to complete a 6-month apprenticeship before licensing. A simple test of an adjuster’s credentials is their National Producers Number (NPN) and their state license number.

Professionals also subscribe to the code of ethics via AAPIA – a lobbying group for public adjusters. Disciplinary actions include
expulsion if found guilty of “unfair trade practices”. Now you see how family money and claims adjusters work together.